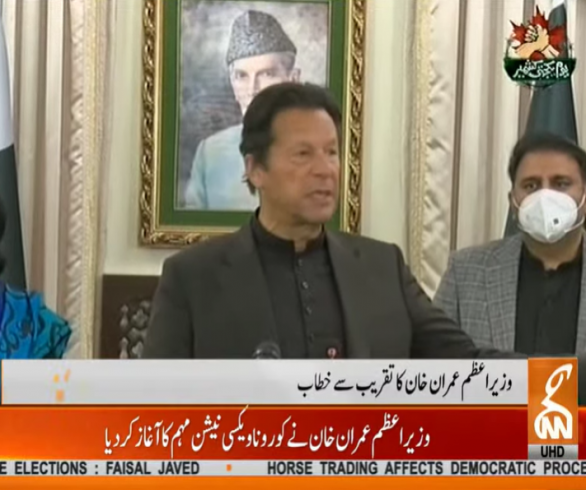 Islamabad: Prime Minister Imran Khan on Tuesday launched coronavirus vaccination campaign, with the first jab administered to a doctor in Islamabad. Initially the vaccine would be available for health workers.

Speaking at a ceremony to mark the launch of the drive, Prime Minister urged the people to strictly adhere to the SoPs to stop coronavirus spread. He said the vaccination would be wisely distributed across all the provinces. He was thankful of China for providing the 0.5 million doses of vaccine.

The premier congratulated his health team for moving rapidly to secure the vaccines and thanked China for donating 500,000 doses of the Sinopharm vaccine to Pakistan.

"This (vaccine) is being distributed equitably among all the provinces so no one thinks we've provided more of it to one province," he said.

Prime Minister Imran Khan urged all healthcare workers to get the vaccine, saying they were most at risk.

"If Allah has blessed Pakistan as compared to the rest of the world, we should be grateful for that and take full precautions," he emphasised.

Before the prime minister's speech, a doctor was given the country's first COVID-19 vaccine shot. The first batch of the vaccines donated by China had reached Islamabad early on Monday morning from Beijing on a special Pakistan Air Force plane.