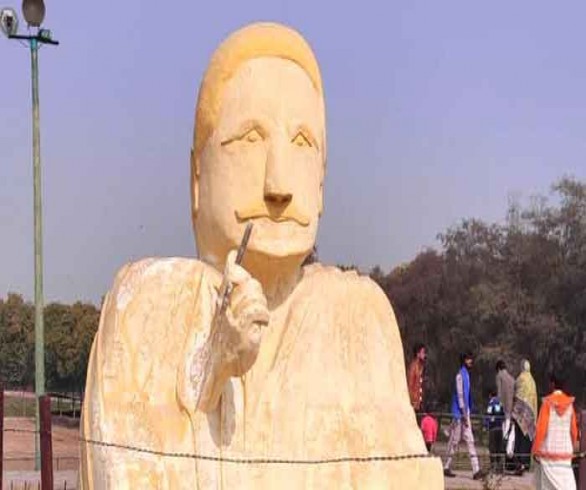 Lahore: A large sculpture of national poet Allama Mohammad Iqbal installed at a Lahore Park has drawn humour and criticism from people on social media.

Recently, someone spotted a statue of Allama Iqbal in Gulshan-e-Iqbal Park of Lahore and posted its pictures on social media.

What made the sculpture an interesting subject was the fact that it did not appear to resemble the man himself.

“There’s nothing wrong in this but it doesn’t look like Allama Iqbal,” Laila Tariq pointed out.

Iqabl's sculpture in Gulshan-e-iqbal Lahore, there is nothing wrong about the sculpture except the part that it doesn't really look like Iqbal pic.twitter.com/zuNyrvXrmB

People were quick to notice this interesting sculpture and the post went viral on social media within few hours.

Some were offended, some trolled, while majority demanded the concerned authorities to replace it as soon as possible.

Who did this blunder in #GulshanIqbal Park #Lahore.
A cheap tribute 2 a legend like #AllamaIqbal is disgusting.@GovtofPunjabPK @UsmanAKBuzdar, @SHABAZGIL sb please look into this.
It should be removed & a new, good one should be eracted!#عوامی_وزیراعظم_عوام_کےساتھ#HelloMrNiazi pic.twitter.com/LgjSeailFQ

What in the name of God & justice , is this abomination ??😳😳 Where are all the lawyers in his family , move a petition in the court .This is not our beloved leader #AllamaIqbal by any angle 🙄🧐 @DCLahore @NasiraIqbal3 sahiba, please do something. https://t.co/UeRP0UFdZG

This is totally a national embarrassment!
PLEASE HAVE THIS REMOVED!
Learn to respect, not making a reason for making fun!
Who made this?#AllamaIqbal #Lahore pic.twitter.com/KdoGZNvf4d

Allama Iqbal’s statue doesn’t surprise me at all ... it’s in line with how we have deformed the country, it’s polity, it’s culture and ideology of its creation. pic.twitter.com/6ekNpxJmpa

Just saw these pictures saying "They have just unveiled a new statue of Allama Iqbal in Gulshan Park Lahore"Can anyone confirm if this is true...if yes, this is unacceptable 😡 is this a joke, who approved it?
#AllamaIqbal pic.twitter.com/htnYiZbmit

Allama iqbal's sculpture 😇
ThankGod he is not alive to see this 🤦‍♀️😅 pic.twitter.com/Y1Pv0ARr29

The thought is nice but I think had he seen this, he might have had another 'shikwa.' pic.twitter.com/borQ2ie6xP

However, it was later reported that the sculpture was made in good faith by the park’s gardeners as a tribute to the national poet.

A comprehensive inquiry should be held to identify responsible people and disciplinary action should be taken against them,” he said.