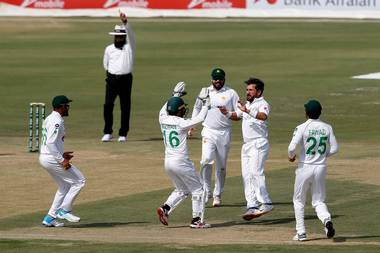 The crucial runs added in the morning took Pakistan’s lead to 158 runs with to a 55 runs stand for the 10th wicket between Yasir Shah and Nauman Ali. Whereas Kagiso Rabada and Keshav Maharaj picked up 3 wickets each.

Proteas batted cautiously around while Aiden Markram and Van der Dussen put on 127 runs for the 2nd wicket but Pakistan fought back through Yasir Shah taking 3 wickets for 53 runs and helped reduced South Africa to 187/4 at stumps.

Man sets employee on fire for demanding salary in Multan