Another Indian conspiracy against Pakistan exposed 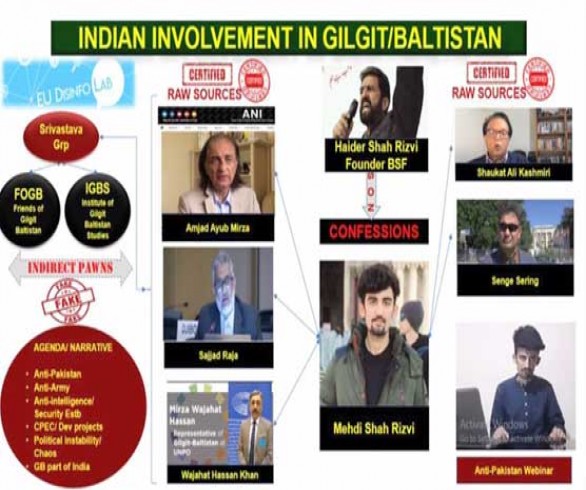 Another Indian conspiracy against Pakistan exposed

Islamabad: Another Indian conspiracy against Pakistan has been exposed by a youth from Gilgit-Baltistan (GB) Mehdi Shah who has confessed that he was being used by Indian proxies for instigating anti-Pakistan rhetoric.

Mehdi Shah Rizvi, son of late Syed Haider Shah Rizvi, has admitted that international forums and mafias driven by India misled his father and compelled him to adopt an anti-Pakistan narrative for money and similar events happened with him as well.

He explained how Scotland based Dr. Amjad Ayub Mirza and Britain based Sajjad Raja and Shaukat Kashmiri misled innocent people of Gilgit-Baltistan (GB) for anti-Pakistan rhetoric.

“All these three people are RAW agents and take money from Indian intelligence agency. They mislead people of GB and Kashmir against Pakistan,” he said.

Mehdi Shah was made to believe that security agencies were responsible for his father’s death following which he left the country and applied for asylum in France. He also adopted an anti-Pakistan narrative and began campaigning against country’s security agencies.

Mehdi Shah revealed that he was incited against Pakistani state, army and other national institutions.

“After joining Balawaristan National Front (BNF) and Baltistan Students Federation (BSF), we were incited to speak up against state institutions. In Italy, Amjad Mirza Sahib contacted and provoked me to protest against Pakistan. He not only gave me sufficient money but also assured me that India stands by us. Greed forced us to protest against Pakistan outside the Pakistani embassy in Italy. All my videos against the army and state institutions were scripted and I attended online conferences to incite youth against Pakistan,” he said.

“During a human rights session at the United Nations, I was given a script to speak out against Pakistan army. I was assured financial support by India for anti-Pakistan demonstrations.  I was also told to burn the Pakistani flag and passport outside the Pakistani embassy,” he said.

Mehdi Shah went on to say that all the so-called nationalists in Gilgit-Baltistan and Kashmir have their vested interests and no one cares about the people.

“They all take funding from RAW and mislead youth,” he concluded.